No Beauty or Majesty 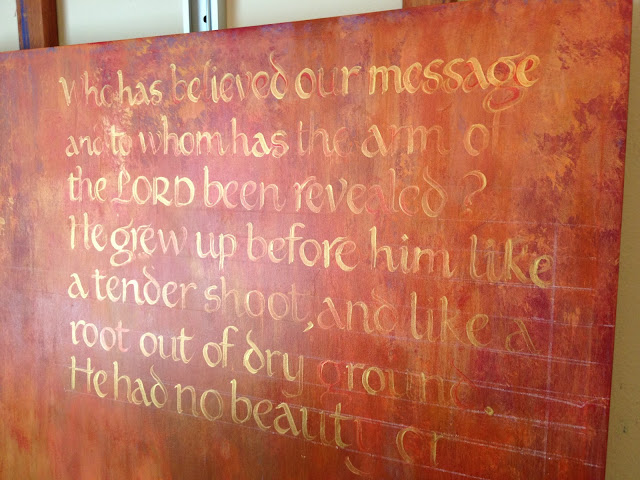 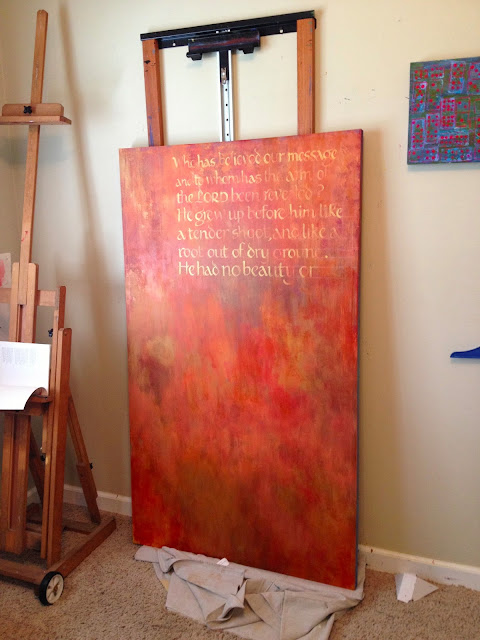 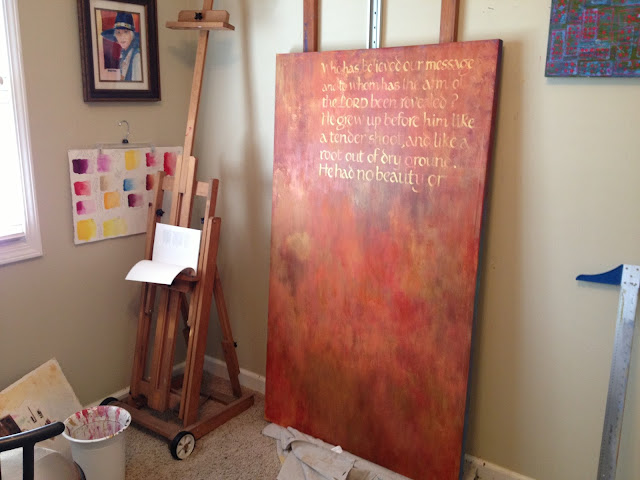 I have started a major canvas project for some friends of ours.  They have a new home and have a wall that I hope this will fit perfectly on.
It is based on Isaiah 53 from the Old Testament.
I have to remember that this is just the background--
that it will have several layers--
Trying to paint an awesome and beautiful canvas
about someone said to have "no beauty or majesty about them to
attract us to him"--
Is somewhat difficult--
While I want the canvas to have a regal and majestic look,
I want it also to reflect the ugly, the pain,
the punishment, the despair, the rejection,
the piercings, the wounds,
the oppression, the afflictions, the judgments,
the crushing loneliness,
But more than anthing I want it to reflect that
JESUS IS VICTOR!
______________________________
Isaiah 53
Who has believed our message
and to whom has the arm of the Lord been revealed?
2
He grew up before him like a tender shoot,
and like a root out of dry ground.
He had no beauty or majesty to attract us to him,
nothing in his appearance that we should desire him.
3
He was despised and rejected by mankind,
a man of suffering, and familiar with pain.
Like one from whom people hide their faces
he was despised, and we held him in low esteem.
4
Surely he took up our pain
and bore our suffering,
yet we considered him punished by God,
stricken by him, and afflicted.
5
But he was pierced for our transgressions,
he was crushed for our iniquities;
the punishment that brought us peace was on him,
and by his wounds we are healed.
6
We all, like sheep, have gone astray,
each of us has turned to our own way;
and the Lord has laid on him
the iniquity of us all.
7
He was oppressed and afflicted,
yet he did not open his mouth;
he was led like a lamb to the slaughter,
and as a sheep before its shearers is silent,
so he did not open his mouth.
8
By oppression and judgment he was taken away.
Yet who of his generation protested?
For he was cut off from the land of the living;
for the transgression of my people he was punished.
9
He was assigned a grave with the wicked,
and with the rich in his death,
though he had done no violence,
nor was any deceit in his mouth.
10
Yet it was the Lord’s will to crush him and cause him to suffer,
and though the Lord makes[c] his life an offering for sin,
he will see his offspring and prolong his days,
and the will of the Lord will prosper in his hand.
11
After he has suffered,
he will see the light of life and be satisfied;
by his knowledge my righteous servant will justify many,
and he will bear their iniquities.
12
Therefore I will give him a portion among the great,
and he will divide the spoils with the strong,
because he poured out his life unto death,
and was numbered with the transgressors.
For he bore the sin of many,
and made intercession for the transgressors.
© all photographs, art and text property of Dianne Hogue unless otherwise noted
Linking to