THE STEPS OF A RIGHTEOUS MAN ARE ORDERED BY THE LORD! Psalm 37:23 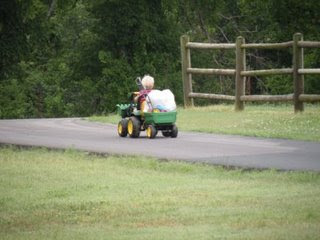 This evening my husband and I were riding around after eating out at Genghis Grill -- really, really good if you haven't tried it and have one near you. I made the Thai Chicken tonight following their recipe suggestions. You mix your own food bowl and then they cook it for you. I made a few little changes, like adding shrimp and lots of cilantro to their suggestions.

Anyway, back to the original story. As we were riding around out in the country, we came upon a young tyke riding a toy John Deere tractor. There were a couple of houses nearby but he had a huge open field to drive in and was making good usuage of the acreage. Believe it or not, my grandfather's name was John Deere (unfortunately not THE JOHN DEERE) but he had a tractor and farmed. This little guy looked just like a little old man sitting up there driving away. He looked as though he really thought he was "doing something." He looked just like "Daddy John" as we called him.

My husband and I remembered a time when we took our family to Silver Dollar City. At that time there was a ride which included an old timey car (sorta like a Model-T and the real size) on a track that went up and down winding curves and hills. There was a concrete barrier that came up between the tires and kept the car on the track. However, the children driving thought they were really driving and keeping the car on the road.

As our 5 year old son fought so hard to keep the car on the track, my husband and I were laughing hysterically at how serious the look on his face was as he approached the next curve. Of course we were playing the game, acting all serious and telling him to get ready for the next big turn and once again unable to contain our laughter as he fought the steering wheel so hard, all the while thinking our lives depended upon his little 5 year old hands.

Thinking back on this I couldn't help but think of how it compares to us as Christians at times. We want to believe our steps are ordered by the Lord--we know the Bible says that all things work together for the good of those who love God and are called according to His purpose (see references below), but sometimes we find ourselves fighting our day to day circumstances, forgetting to trust the God of the Universe who has a nice big barrier to keep us on course (if we let Him) and who had planned every day of our lives before we were ever born.

Rom 8:28-29
28 And we know that in all things God works for the good of those who love him, who have been called according to his purpose.

Ps 139:13-16 For you created my inmost being;you knit me together in my mother's womb. 14 I praise you because I am fearfully and wonderfully made;your works are wonderful,I know that full well. 15 My frame was not hidden from you when I was made in the secret place.When I was woven together in the depths of the earth, 16 your eyes saw my unformed body.All the days ordained for me were written in your book before one of them came to be.

My goal today is to trust Him more.