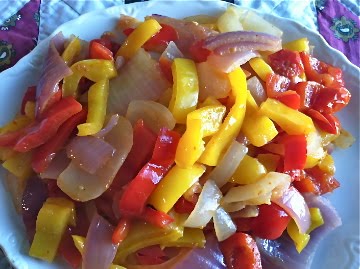 Oh my goodness, was this ever good. Let me tell you what I did.

I googled a few items that I had--I was low on groceries so I thought I might find a chicken spaghetti recipe that would hook up with the supplies I had on hand.

Sure enough, there were several recipes that looked promising but none that I had all the ingredients for.

And it was enough to feed an army.  We (just two of us) ate a meal and froze enough for two extra meals from this single recipe.

It would be easy to cut in half, I think.

I sauteed in butter and white cooking wine,

I removed them from my big skillet and added extra virgin olive oil, white cooking wine and one can chicken broth to cook four large chicken breasts--

After cooking the chicken thoroughly, I took a cup of the (mainly) chicken broth from the breasts and added to the water where I was cooking my angel hair spaghetti (a 1lb package).

Watch this carefully because it is very thin and cooks really fast.

After chicken is done cut it into small bite-sized pieces,

mix together 1 can mushroom soup,

Mix all of this together in the large skillet that you cooked chicken in,

I didn't need to do this but if it is too dry after mixing, you can add small amounts of the leftover chicken broth until you get the consistency the way your family likes it.

I didn't have any green bell peppers or I would have added those also.

This may be one of the best dishes I have ever made in my life. 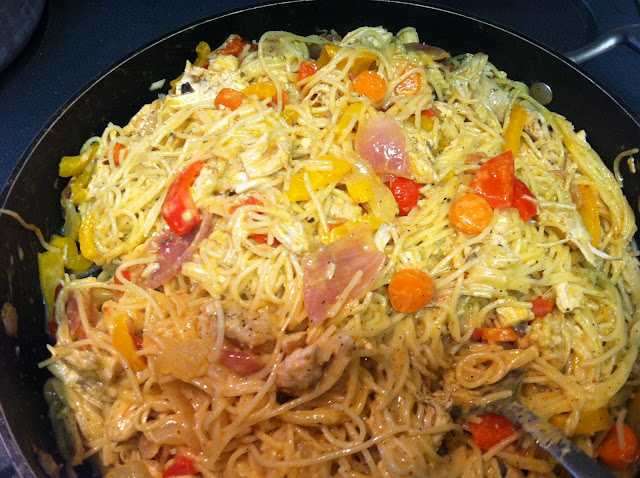