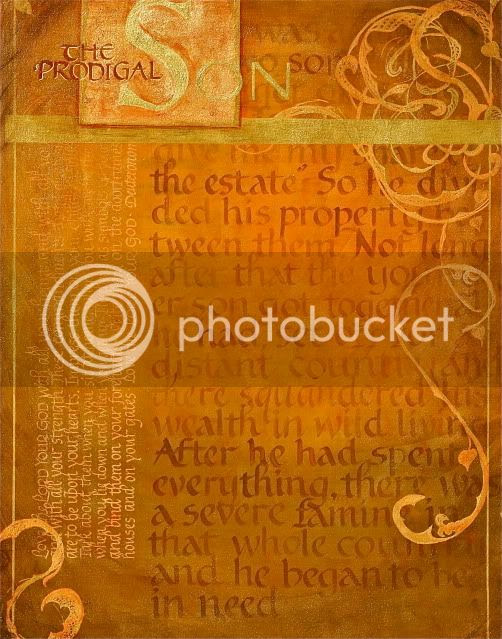 Became dissatisfied in his current environment.

Demanded what was "rightfully his."

Made some very unwise decisions.

Spent all he had.

Began to be in need.

Remembered all that he had before.

Feast prepared in his honor.

Was reconciled to his father.

The picture above is a 3' by 4' canvas I painted to enter in an art show a few years ago. Each artist had to provide an inspiration statement. The piece did not turn out like I thought it would when I started. I had orignally intended to have celebratory phrases covering the background script. However, I was so moved when I read "and he began to be in need"--I knew the canvas story had to stop there.

Because? Because in page after page, chapter after chapter from God's Word we recognize that this is the story of all of our lives. Somehow, we don't recognize "our need" for the Father until we "began to be in need."

I wanted to leave the viewer with a question that needed to be answered-- "Have I been reconciled to the Father?"

And He is there for each one of us--to reconcile each to Himself.

May this story and Ash Wednesday be a reminder to all of us that when the dirt, dust and ashes of this fallen life cling to our worn-out sandaled souls, we can be bathed and cleansed and clothed in the finest of robes, just as the father in this story provided for the prodigal son who recognized his need, placed his pride beneath him as he traveled that long distance home from a foreign land.


© ALL ART, PHOTOGRAPHS AND TEXT PROPERTY OF ELIZABETH DIANNE UNLESS OTHERWISE NOTED, ALL RIGHTS RESERVED, 2008-2014

a repost of past pages