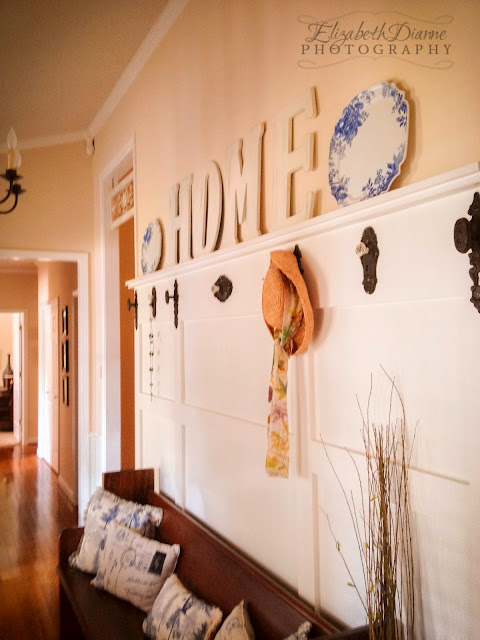 This is our entry hall that we've been working on.

First of all, this entry hall seems big to me for the size of our house.

It seemed like a lot of wasted space so I really wanted to make it as usable as possible.

I had wanted a church pew for a few years so we finally broke down and bought one at
Morris Antiques in Keo, AR.

I scoured the internet and Craig's List for a long time but
never found what we wanted.

Well, I did find a few but they were in states far away and it would have cost an arm
and a leg to have it shipped.

My husband and a friend built the board and batten.

The knobs and H*O*M*E* letters were purchased at Hobby Lobby.

The hat is one I've had for many, many years and the scarf tied around it was batiked
for me by an artist friend in Tulsa.  Thank you, Angie. 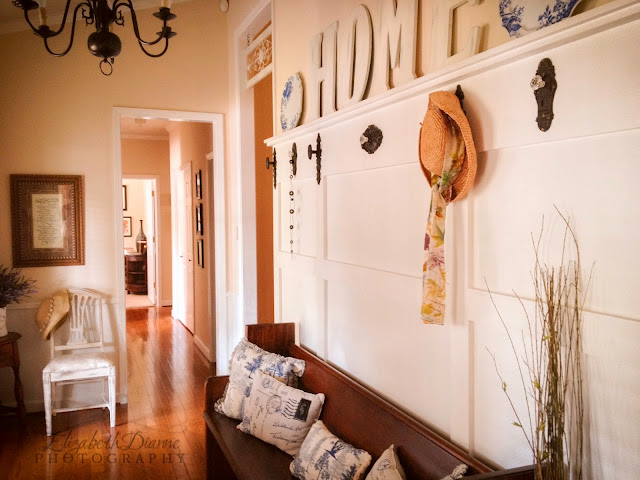 The platters came from Tuesday Morning and I almost didn't spot them.

They were on a very bottom shelf at the very back.

So glad I found them.  I love how they look.

This is a fairly large wall and they
are very substantial.

I had regular-sized plates on there at first and they were
just not big enough.

The pillows were bought at At Home.

One thing I would like for you to notice is the tall doorways.

Why on earth they were built this tall (it doesn't help that they are skinny), I will never know.

We thought of putting transoms in, but that was way too cost prohibitive.

A year or so back, I bought some teal wood and metal wall plaques at Hobby Lobby.

They still stock them by the way.

One day I had the idea to turn them horizontally and see if they would fit at the top of the doorway.

They were a perfect fit.

I painted them with Annie Sloan Old White--gave it a good sanding--and my husband hung them by chandelier chains.

I didn't get a very good picture showing them but they really worked out well. 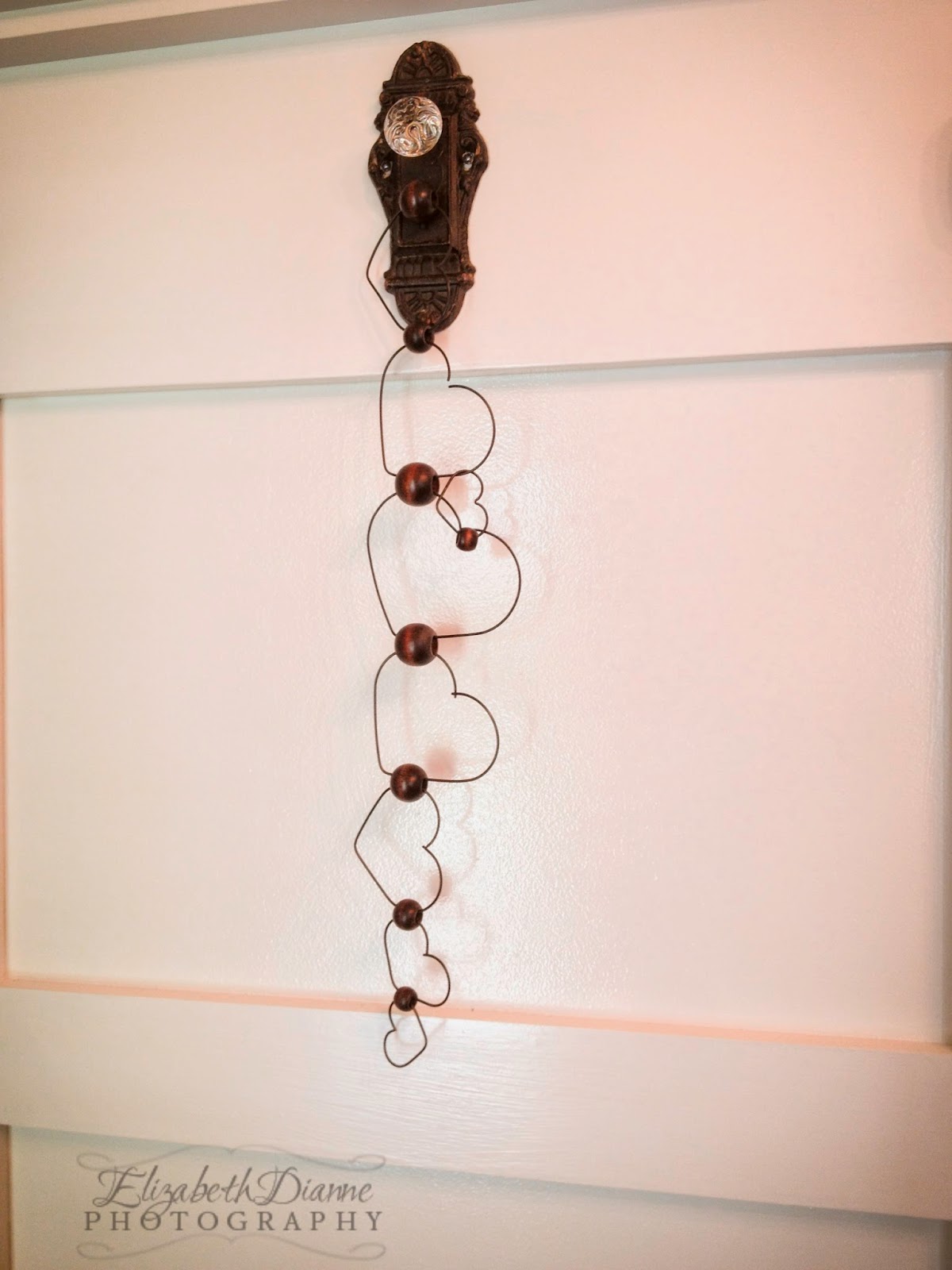 On one knob hangs a sweet little chain of hearts that I've had for many, many years. 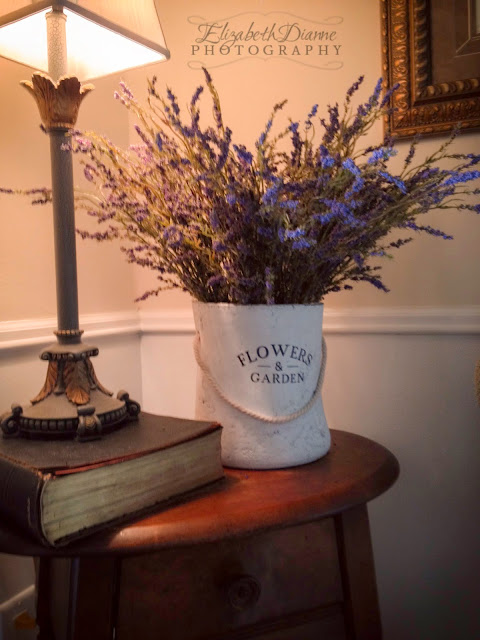 The pottery and faux lavender I bought recently at Mid-Town Antiques here in Little Rock.

I had to feel of the lavender to see if it were real or not.

It is the prettiest faux I've ever seen.

I hope they have some more when I go back.

This was all they had when I was there. 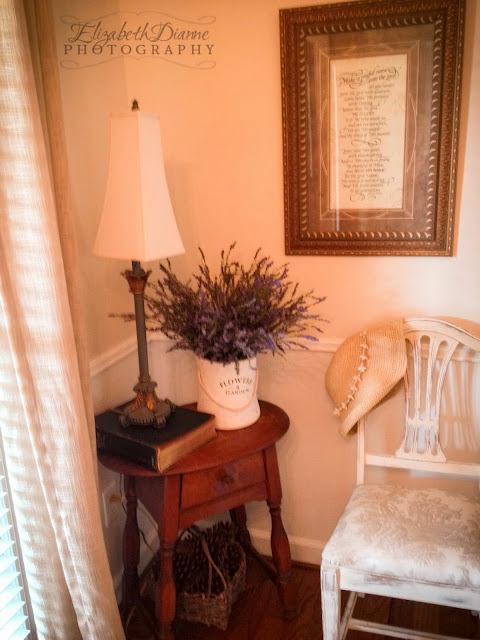 The small oval table belonged to my husband's mother.

The chair--well, it came out of someone's trash pile.

Yea, I was just driving along one day on the street I live on about a mile away and lo and behold.
I couldn't believe it.  The chair was sturdy as could be--the cushion was rotting and falling apart but that's all that was wrong with it.

I painted it with AS Old White and another good sanding.
We covered the cushion with beige and white toile and voila--I love it! 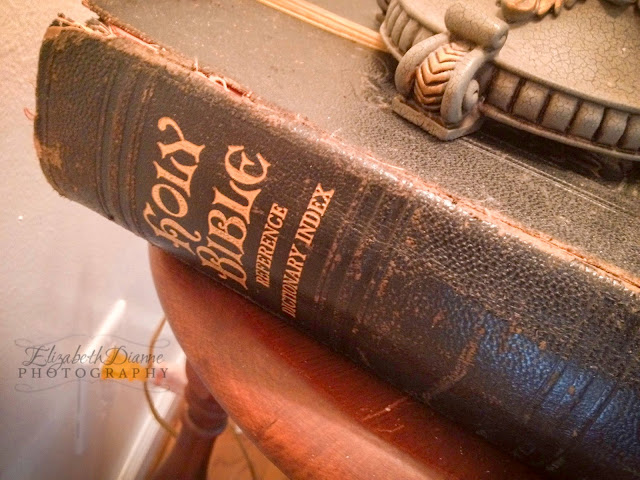 The lamp needed some height so we placed an old, thick Bible, given to my mother-in-law by my husband's father in 1941, under it. 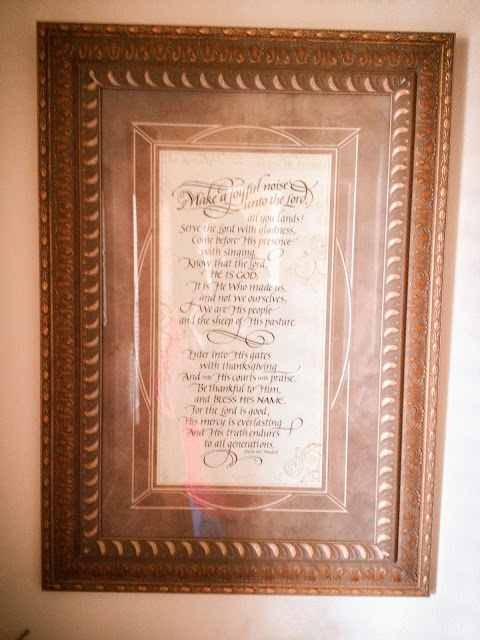 I've had this Bible calligraphy for many years.

It was done by a former calligraphy teacher of mine, Marj Miller who worked for Carpentree at that time.

I bet if you look on the back of some of your pieces, that many of you own Carpentree pieces.

They were located in Tulsa and I got some awesome buys there at sales they would have once or twice a year at the factory place.

Okay, that's it for today.  I will show you the other side tomorrow and a little closer look at the top of the doorway.

Happy, happy Wednesday to you,
All my love,
Dianne