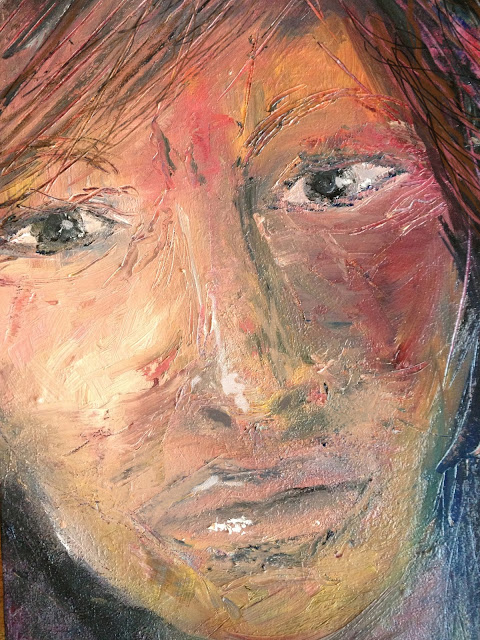 Her pain was great.
Her misery engulfed her and had for twelve years.
She had exhausted every avenue of medical knowledge,
Spent her life's earnings.
She had an issue--an issue of life-taking blood.
His presence was great.
It engulfed and enveloped everyone around.
He had used but not exhausted the vast knowledge of His Father.
He was soon to have an issue--an issue of life-giving blood.
In the meantime He went about doing good--
healing those who were hurting,
comforting those who were mourning--
Feeding those who were hungry.
In her meantime, she went about searching
For the one she had heard so much about--
She heard that He had set free a demon-possessed man,
And the winds and waters of nature obeyed Him,
yes, that's what she had heard--
Even heard that He had raised up a paralyzed man,
And cleansed a leper's spots.
She believed the stories she had heard about Him.
She knew her faith came from God.
Her faith was a desperate faith--

In Jewish culture she was considered unclean.
An outcast--society's outcast.
But she knew the moment she could reach out and touch Him,
She would be healed.
He knew the moment she had reached out and touched Him.
He felt power flow from Him to her.
With so many of the multitudes touching Him,
Why did He suddenly notice when she touched Him?
Could it have been because her faith was stronger,
more desperate?
A certain woman who He now called "Daughter"--
~~~~~~~~~~~~~~~~~~
We all have issues.
What's your issue today?

Is your issue so important that it causes you to have a desperate faith?
Whatever it is, I pray that your faith matches that of this woman.
I pray that you search for Him and find Him,
that you reach out to Him
and are healed.

Prayer Request:  I can learn a lot from the woman above--she had been "waiting"

for twelve years for her healing to come--

the normal surgery would not help it--that the knee

or most of the things I love.

I can read and I am on the computer a lot designing etc.  I love to do that.

but I learned to wait--

and God taught me so many incredible lessons during that time.

I wouldn't go back and change it if I could.

The lessons were too valuable.

But my thirties were four decades ago and the lessons can sometimes get a little stale.

So my prayer request is this--

waiting for healing to come will be productive ones--

That I won't waste my sorrows--

The surgery is on Tuesday the 11th.

with the love of the Lord.

And I will be back soon I hope.

Thank you for reading and praying.

I really appreciate it.

© all photographs and text property of Elizabeth Dianne unless otherwise noted