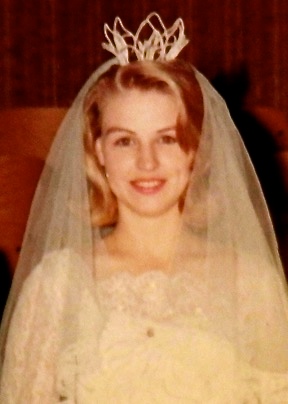 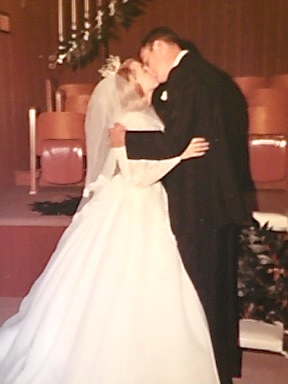 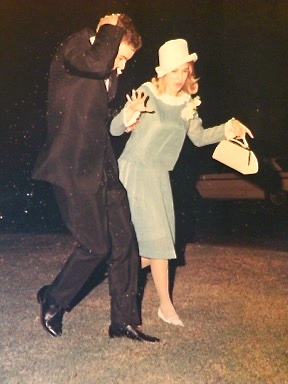 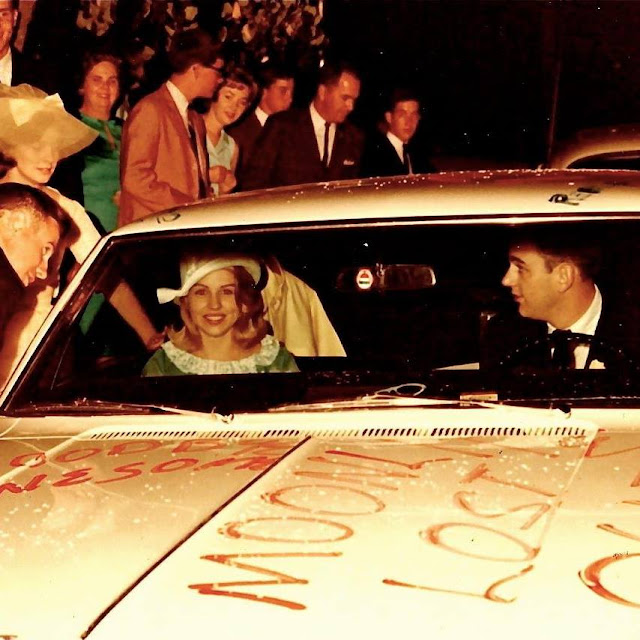 When Larry and I were dating and starting to get serious, he sent me a dozen red roses. That bouquet contained a white orchid. Now, it just so happened at this point in time that there was a popular song by Wayne Newton entitled "Red Roses for a Blue Lady." 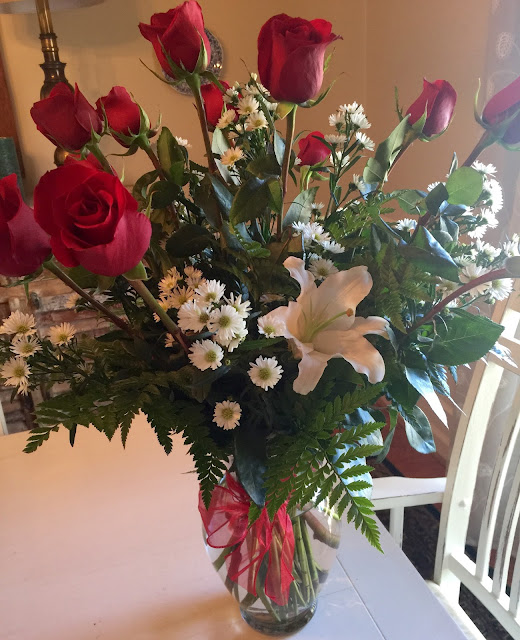 Also, the lyrics contained the line, "and one white orchid for her wedding day," and it also talked about "a silly quarrel," which we also had had.  The only one we had in over a year of dating-- 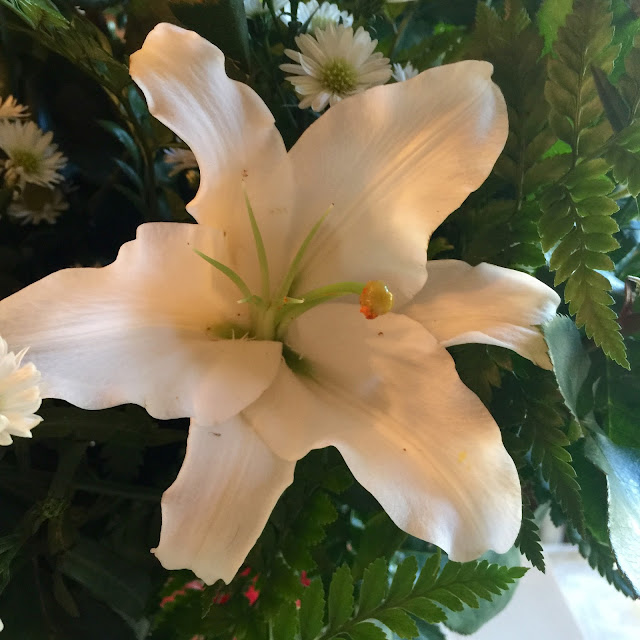 I thought Larry was starting to allude to marriage about this time during our courtship so when I got the flowers, I wrote him a letter and said, "Yes, I will." He was working out of town at the time. He wrote back and said, "Yes, you will what?"

I don't remember when I got up the courage to tell him that I was answering "yes" to what I thought was a marriage proposal. We found out later that Cabot Florist in North Little Rock (the greatest florist anywhere) automatically put one white orchid in every bouquet of a dozen roses. OH ME! How embarrassing!! 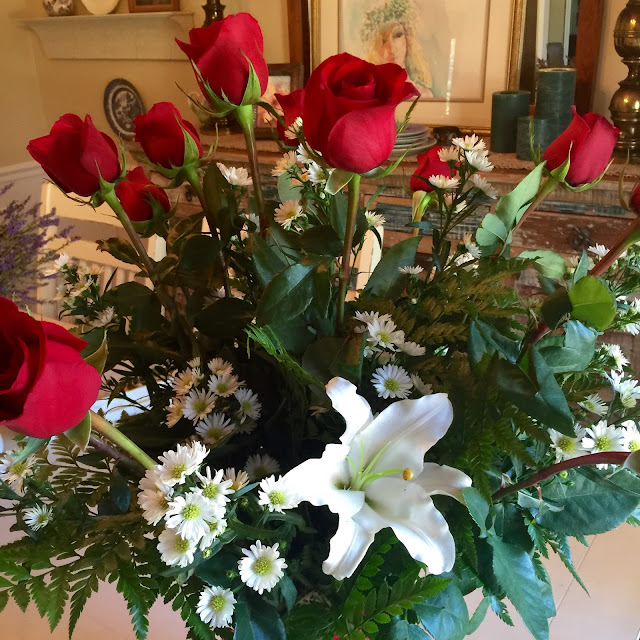 Last Friday morning (July 31) he drove to North Little Rock to the same florist to get me one dozen red roses with a white orchid but alas, fifty years have changed things somewhat and they no longer have white orchids.  They did place a white lily in the bouquet, though, and it is beautiful.

I'm not sure what celebrating 50 years of marriage is all about, but I have concluded a few things:

* It feels pretty good to have had the privilege to love my wife for 50 years. Maybe that's enough, but ....

* She loves God and we have attempted to build our marriage around a covenant with Him and each other. Now that is something to really celebrate, especially when we actually do it. And ...

* We both had parents to point us to God. I have concluded success in our marriage and anything else is always preceded by obedience to our Lord and Savior. Our parents lived this truth and showed us how to live. Then ...

* We had three ornery boys along the way and I lovingly refer to them as goats. It seems that they are not perfect, just like their Mom and Dad, but they have good hearts and I am desperately proud of them. We also had a special son who lived with us for a time and who remains in our hearts. He's living in New York City and we've only seen him once since he left us 20 or so years ago. He'll always have a special place in my heart and he has made me very proud. Then there are those special guys at Renewal Ranch that we learned to love deeply during their short stay. What magnificent testimonies they have about overcoming their addictions. We love them all. And ...

* If that were not enough, we acquired 3 daughters too, and what a catch. We have loved them and they have loved us - what more can I say. And ...

* Eight grandchildren and one grandson-in-law later, Dianne and i are abundantly blessed. All except the 2-year old have given their hearts to Christ.

* All of these things are not peculiar to our marriage but they are blessings from God and I celebrate them. He is the source of life, and not only that but abundant life when I choose to do it His way. And He loves us unconditionally. The love between Dianne and me, and among my family is nothing more than God's love through us. Thank you God for my wife and my family and my friends.


And this is what I posted:


Fifty years ago today, I got up early, took my shower and put my hair up in rollers so it would have a few hours to air dry,
drove to the Heights to pick up my wedding cake, (there was an awesome bakery up there--can't remember the name of it now)--
swung by Little Rock University to borrow their silver punch bowl, 200 cups, plates, and saucers, drove to East Broadway to my pastor's house,
proceeded (with my mom and maid of honor) to hand wash 200 said plates, cups, and saucers--
drove to grocery store on Wright Avenue to buy sherbet and ginger ale for the punch, brought it back to parsonage,
went home (southwest Little Rock), got ready, drove to church, picked up a handsome dude along the way,
ended up that evening at the Aristocrat in Hot Springs, AR--
oh, we made one more stop--I had dreamed all my life of driving off with my Prince Charming in a car all painted, cans clanging from the bumper, et. etc.--
and people honking at us all the way to our Honeymoon destination.
As soon as we left the parsonage where reception was held, Larry whipped in to a car wash and proceeded to wash his brand new SuperSport Impala Chevrolet (with stereo radio)--there was only one stereo radio station at the time in Little Rock--LOL--
I sat there in stunned silence watching all my little girl dreams wash down the drain--ANOTHER LOL--
Oh, the unreal expectations we have as young lovers--I can look back now and laugh at my ridiculous self but at the time I thought it was the end of the world--ha ha--
All I can say is "he more than made up for it" and we had a beautiful new car that didn't have a stained paint job--
Happy Anniversary Honey! 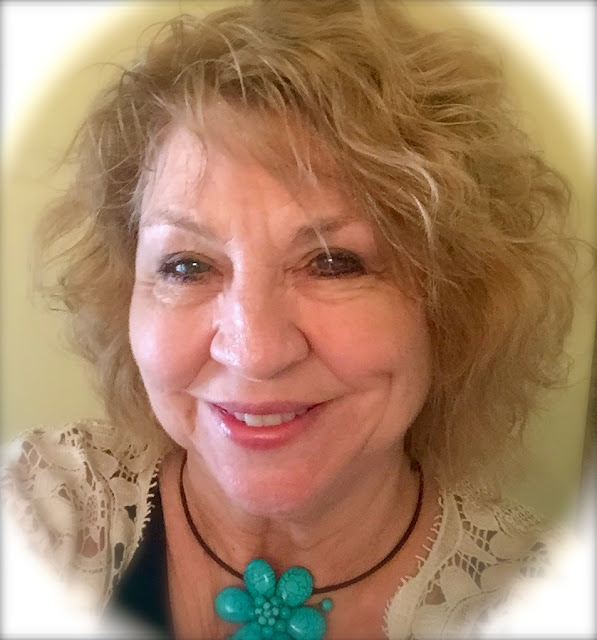 This picture was taken last Friday on our anniversary.

no filter, no retouching--
--will make sure I post one of my husband and me soon that HAS
been retouched--

Here is the beautiful table that my daughter-in-law set--
I forgot to take a picture of the steak and lobster--
It was the best I had ever had! 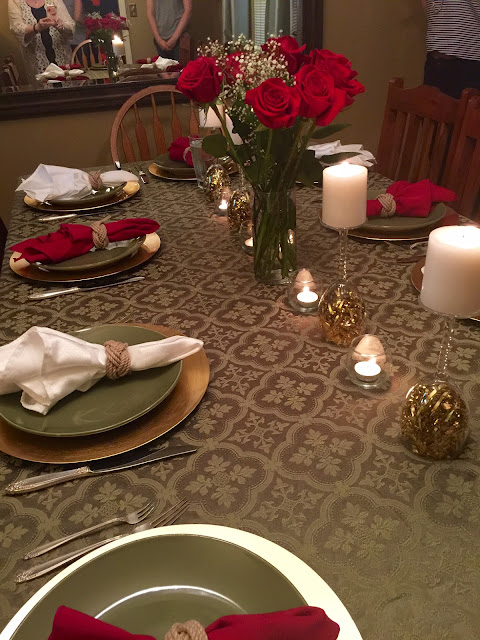 and the cake was absolutely delicious--strawberry on the inside! 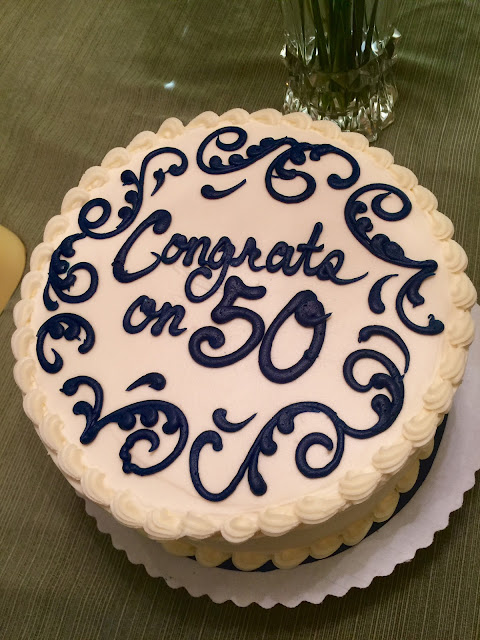 © ALL ART, PHOTOGRAPHS AND TEXT PROPERTY OF ELIZABETH DIANNE UNLESS OTHERWISE NOTED, ALL RIGHTS RESERVED, 2008-2015


I love hearing from you. Email address can be accessed at top left of this page.