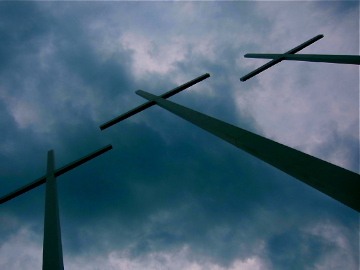 Consider this--do you think the risen Lord talked to His companions on the Emmaus Road about Moses the deliverer spoken of in chapter three of Exodus?

Did He explain to them how God's people were in bondage, in deep slavery and needed someone to deliver--to lead them to a land that was flowing with milk and honey where they could find true rest for their souls?

Did they understand that they were the captives and now had access to freedom?

If Jesus quoted this verse to them

Now Moses was tending the flock of Jethro his father-in-law, the priest of Midian, and he led the flock to the far side of the wilderness and came to Horeb, the mountain of God. There the angel of the LORD appeared to him in flames of fire from within a bush.

do you suppose they really understood that it was in the desert, the wilderness, the storm of crucifixion that their freedom was purchased?

Do we understand that sometimes it is on the far side of the desert where we find the Lord Himself and realize we are standing on Holy Ground?

You can pause music at the bottom of page--