Out of the Mouths of Babes 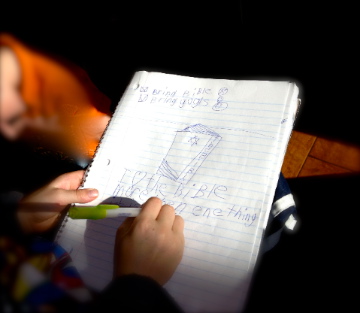 Saturday as I was sitting in chapel beside the son of one of our residents, I looked down and noticed what he had written.  "I 'heart' the Bible more than enething."

To say that my heart was touched may be the understatement of the century. I can't quote it exactly but when I told his father about it, he told me what his son had said at Thanksgiving that he was thankful for.

Loosely paraphrased it included a father who studied the Bible so much and tried to do what Jesus says. Out of the mouths of babes..............
As I sat in a rocking chair on the front porch of the bunkhouse after chapel and potluck and watched this resident run and play with his wife and two sons for an extended period of time, I was overwhelmed at the healing that has taken place in his life.  Oh, if you could only hear his story your heart would rejoice like mine.

Jesus is no respecter of persons--He longs to do for you and me what He has done for this young man and his family--won't you open your heart to Him?  He stands ready, willing and able to comfort you and heal your life.

Christmas blessing to you,
Dianne