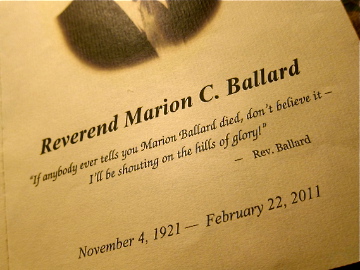 There is no way I can do justice by my meager writing here to capture the utter peace, joy and air of celebration which invaded the sanctuary of Little Rock West Church last Saturday morning.

It was a lengthy service and one that I did not want to end. It started with congregational singing and Bro. B.'s 85 year old widow was one of the first to stand, start clapping her hands, and raising them to Jesus in songs of loudest praise.

I had not heard him preach since I was a teen-ager so to walk into the auditorium with a big screen flashing pictures of him and his voice coming strong over a loud speaker was quite emotional and entertaining for me. He was the most sincere, the funniest, "the most" of any good adjective concerning preachers that you can ever imagine.

But the strongest message, among many, emphasized how much he loved his flock and the community around his church--he was pastor to a whole community.

Many stories abound of how he was the first one present in the middle of the night when there was a need, a hospitalization, a tragedy.  Some people there validated the fact that instead of calling their own pastor during a time of crisis, Bro. B.'s number was the first one dialed.

Two of his grandsons spoke--one a preacher himself following in the footsteps of his grandfather.

After I"ll Fly Away and several other rousing songs, a quartet from many, many years ago sang Beyond the Sunset, one of his favorites.

Bro. B could preach heaven down in a matter of minutes but he could not carry a tune in a bucket with a lid on it. However, there was one song that from time to time he would start singing out of the clear blue. We had an incredibly talented pianist who had perfect pitch--she played by ear and honestly I've never heard anyone in my life who could play better than she.

If anyone in the church started an unplanned song (this was quite common fifty years ago), she could, almost immediately, go straight to "the key" they were singing in and start the piano accompaniment. She would tell the guitarists and the accordion player (me) and away we would go. However, Bro. B.'s singing was so bad that she would hunt and hunt before she could find the "key" he was singing in. We always laughed and said he was "singing between the cracks of the keys."

In spite of the unheard of chords, when he started this particular song it was so anointed that if we had been lifted straight to glory at that moment, it would not have surprised us. So, when the song leader started

I know God is God and He always will be God.

I know God is God and He always will be God.

I know God is God and He always will be God

Needless to say, we thought we all might go straight to Glory with Bro. B right then.
Oh My!


Bro. Ballard was a patriot to the marrow of his bones. He served under Gen. Patton at the Battle of the Bulge during WW 2. When asked what he remembered Gen. Patton saying to his troops, what stood out in his mind was this: "Let's win this war, men, so we can go home."  Patton was smart enough to know that the mention of home would motivate them like nothing else. 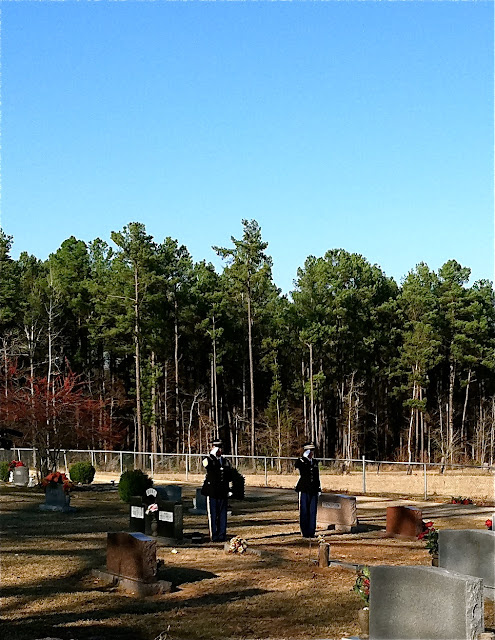 Well, Bro. B. was a mighty warrior--a warrior who has gone home to his reward--His greatest reward? Quite simply the privilege of laying his crowns at the feet of Jesus, the One He loved with all his heart.

The preacher who spoke shared this scripture as his text:

"By faith Abel brought God a better offering than Cain did. By faith he was commended as righteous, when God spoke well of his offerings. And by faith Abel still speaks, even though he is dead."  Hebrews 11:4

He made the point and gave many examples of how Bro. Ballard's voice is still speaking even though he is dead.

One of my favorite stories that was told Saturday morning went like this:

"I lived in the community around Bro. Ballard's church and I was not going to church at the time.  It was on a Saturday morning and I was out in the driveway working on a car and here comes Bro. B driving his little Opel, stops, gets out and proceeds to help me work on that car.

Now I don't know what I would have done if he had been driving a Cadillac cause it was all I could do to handle the load of conviction he dumped out of that little Opel, let alone a Cadillac."

In a pastoring career that spread over a half century, his voice has spoken to thousands of the great faithfulness of our Lord Jesus Christ. My friend, his voice speaks as loud or louder today than when the breath of life came from it.  Powerful words, aren't they--Dead Man Talking! What will my life say after I am gone?

Bro. B. was my hero--a better husband, a better father, a better pastor, a better soldier I have never known.

I will always hear his voice as long as I have life and a sane mind.  He was one of the propelling forces in my life who taught me to love God more than my next breath.  And since his oldest daughter was my best friend and I spent more weekends at their home than I did my own, he was more than my pastor, he  was my father.

Bro. B.'s burial was in a small town about an hour and a half drive from the Little Rock area.  It is a little out of the way town that I had not returned to in fifty years.  It brought back many memories of my teen-aged trips there with their family. 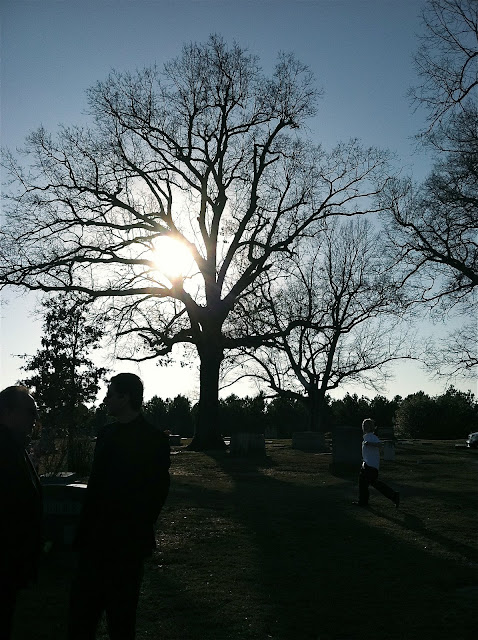 As the day drew to a close, my heart was sad but so, so glad--so glad that I had been privileged to know this 5'5" tall giant of a man whose legacy will go on as long as this world lasts.


Always listening for His voice and his too,
Dianne
2011-the Year of Beyond