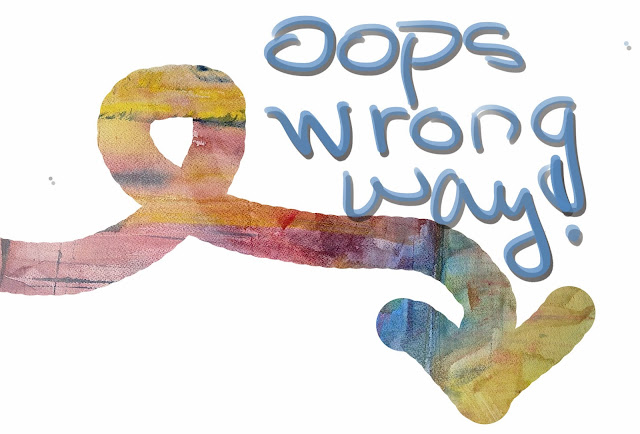 When my first granddaughter was about ten years old, I was bringing her and her little brother to Tulsa from Little Rock (this was when I lived in Tulsa) to stay a few days with me.

At that point in time, I had been driving this particular stretch of road back and forth several times a year for about twenty-six years.

After taking a rest stop break, I pulled back on the interstate, and my little "know it all" granddaughter said very matter of factly, "Mimi, you're going the wrong way."

At that particular moment, I had what I thought was a good idea to really teach her a lesson about telling her grandmother what to do.

I groaned in a very pained voice, "Oh no, I got on going the wrong way and it will be at least ten miles down the road before there will be an exit and I can turn around. We are going to be forever getting to Tulsa." (It is about a 4.5 to 5 hour drive with a couple of stops)

I told them over and over to be sure and watch for signs for the next exit. Sure enough, several miles down the road, the signs started appearing but just about the time that we got to the exit, I turned to my left, looked out the window and screamed in delight at a cloud that "looked just like an elephant." They immediately crained their necks and looked to the left.

I started telling them about a book I used to read to my first graders entitled, "Spilt Milk." It is about clouds and their shapes. Then I proceeded to loudly lament that I had just missed our exit.

Of course, they cried, "Oh, Mimi, I can't believe you did that. Now we have to drive another ten miles down the road, etc. We are never going to get to Tulsa. You need to watch what you're doing....blah, blah, blah."

Several miles down the road I saw an exit coming up and there just happened to be a really long tractor-trailer rig up ahead. I made sure I got up beside him and acted like there was no way I could go fast enough to get around him.

I was putting on a big act screaming all the while, "Oh, no, why did he have to speed up and now there is no way I can get around him to exit. It's going to be dark before we get to Tulsa."

Well, needless to say, they started screaming and carrying on--it was crazy!

But by this time, I was in stitches laughing so hard I could hardly stand it. They thought I was laughing to keep from crying. I finally decided to give it up at that point in time and tell them that I had played a big joke on them for being such "little know-it-alls."

At first they tried to act mad but then they ended up laughing and crying in relief. They had been so worried that they were never going to get to their destination.

Now, just a little point here. I have a friend who admits to telling God how she wants Him to work out situations in her life.

There are times to pray for specifics when the Bible has made clear to us what God's will is in certain situations.

However, we all have things arise that we do not know what the best or wisest answer is. That is when we should, in my opinion and what I believe the Bible teaches, depend upon God for His answer, trusting in His wisdom.

Just can't help but wonder where she got that little touch of 'know-it-all!'


©All art, photographs and text property of Elizabeth Dianne unless otherwise noted, 2008-2014, all rights reserved.