Disclaimer: I want to share this story with you but up front I would just like to say that God did this and used me in spite of me--not because of me. So, please, if there is any glory, it must go to God, and Him alone. Thanks.

This story probably began many years ago but I will come back to that later. Two weeks ago today, I took a wild hair to clean out my purse. This is not normal for me. I carry the same purse for years at a time and have pockets that have not been touched in almost that amount of time. But important to the story is the fact that I found something in my purse that I had forgotten I had. I won't tell you what it was right now. That will come later also.

I am sorry to say, because of being retired and the extreme heat this summer here in our neck of the woods, I have hardly been outside even to go to the grocery store. My husband plays golf regularly and he would stop and pick up almost everything that I needed. However, I did get out about a month and a half ago to buy some jeans I needed for an upcoming event. I ended up not going to the event and the jeans did not really fit right so on the same day that I cleaned out my purse, I decided to return the jeans. And after all, it was only supposed to get into the 90's that day and I better make good use of it--right? We had suffered so many days of heat or heat index over 100 degrees, I wanted to make hay while the sun wasn't shining.

Anyway, I returned the jeans and while there took another wild hair. This time I decided to get a pedicure--you know, end of summer--it had been a year since I had had one--really smart idea, huh? And on top of that, I decided not to go to the Walmart close to me but one in a town about twenty minutes away, where my DIL and granddaughter get their nails done sometimes.

Upon arriving, I asked the door greeter where the nail salon was and he said, "Oh, you want the ____________ (he named a foreign country)people down the way and told me where the salon was.

Upon arrival at the salon, a nice young man helped me and started working on my sad, little feet. Well, not so little but anyway.........he worked silently for what seemed like an eternity--not saying a word--just pressing down on my foot when he wanted me to put it in the water or lifting up on it slightly when he wanted me to remove it.

As politely as I knew how, I told him, "I don't want to offend you in any way but you know, the one your religion was founded upon is dead and Jesus is alive. He smiled and said in his charming accent, "Oh, I visit big church up on hill. And I visit big Bible church." I knew the ones he referred to.

"I like to hear what preacher say. You go church? What did your preacher preach about last Sunday?" This really got the best of me--I could not, FOR THE LIFE OF ME, remember what my preacher had preached about last Sunday. How embarrassing!!

He told me, "I see Jesus one day. I driving along and look over to side of road and there is Jesus." At this point, he takes both hands out of the water and starts describing the sandals that Jesus had on. "He had on brown robe also. I look and he there one minute, I look again, and he gone."

By this time, the whole salon (which was only a few people I might add) was looking at us but I didn't care and I know he didn't either. I started crying, tears streaming down my face when he started describing the vision he had had of Jesus. I was overwhelmed because I knew he was searching and I knew that God had revealed Himself to T. (I will just call him T. because I can't adequately pronounce his name and I would like to afford him some anonymity.

He told me that when he goes to church he gets these big bumps all over his arms and everyone around him notices it. I had to smile really big at that.

At the manicure table, he opened the small booklet I had given him moments before (the gospel tract that tells how to accept Jesus Christ as personal Lord and Savior that I had found in my purse that morning) and started reading out loud. "God loves me and has a wonderful plan for my life. I want to see what next page says." And he proceeds to read the opening sentence on that page. I must say I was a little dismayed to see that the booklet contained some words that would be hard for an "English as second language" person.

I asked him if he could understand a Bible written in his own language better and he said yes. My husband was getting ready to go to Oklahoma on a golfing trip and I had not planned to go. However, I started thinking about visiting my neighbor of thirty years before we moved to another state and the since she had sponsored at least a couple hundred people from T.'s country, I figured she might have a Bible from there. So because of that, dear kids and grandkids to see and one other reason, I decided at the last minute to go with him.

I made arrangements to go see my neighbor who is now in her eighties but still very active in her church. I asked her if she had a Bible in that language and she said that the only one she had, she had taken to church and put in their display case along with some other foreign-language Bibles. She said with a wry little smile, "Hold on just a minute--I'll show you how to get things done." She proceeded to walk over to the desk, pick up her phone, punch a few digits and say, "Pastor, would you get that ____________ Bible out of the display case and bring it to me tomorrow?" Sure enough, he did and sure enough, she gave me the Bible.

Today, I made a trip to Walmart to see my new friend. The shop was empty of customers when I went in. He was in the back but it didn't take but just a second or two for him to know I was there. He told me that he had prayed the prayer in the back of the tract I had given him and had gone to church. I asked him if I could give him a hug and as I hugged him, I welcomed him, my brother in Christ, into God's family. As I left, a girl who works in there who I think is from his country of origin came over and started looking at the Bible and saying, "Thank you, thank you."

The story that began years ago--my neighbor who gave totally of herself to sponsor myriads of refugees from this country--housed them, fed them, took them to school, to jobs, to doctor's appointments, to take driver's license tests, to get naturalized, to church. If they lived with her, house rule was they had to go to church. There is no telling how many souls this precious soul has influenced for Jesus. 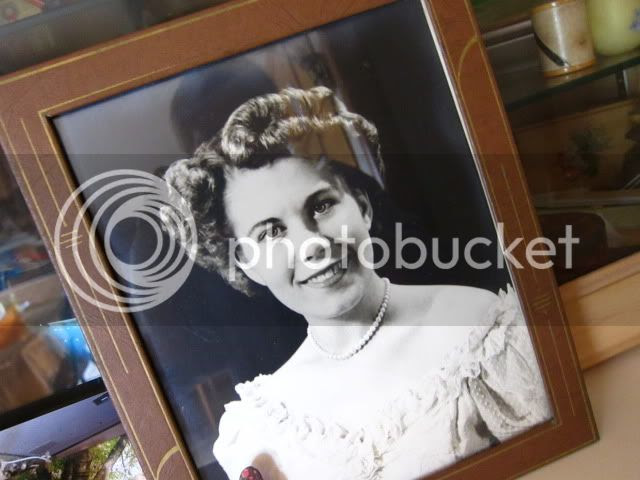 So today I dedicate this post to her--her husband died in May and I went to see her shortly after. She had put out some pictures of him and her that I had never seen before. I took pictures of her pictures.  So Elda Mae, dear Elda Mae, this post is for you. I love you with all of my heart. To say thank you for this Bible, seems so inadequate--but thank you. In giving T. this Bible, you have given him access to growth beyond measure in his Christian walk.

And my dear blogging friends, I know many of you have so many you are praying for, but won't you take just one breath and whisper T.'s name in prayer. Thank you.

2010-the Year of Longings
He longs to show us great and mighty things.
I long to be satisfied with Him alone.
Labels: Bible Elda Mae