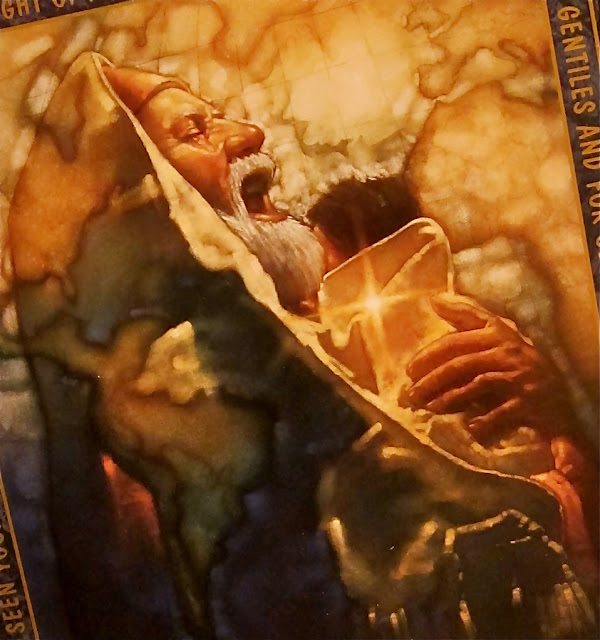 Remember the story of Simeon in the Bible?  He had long awaited the birth of the Messiah and had been promised by the Holy Spirit that he would not die before seeing the Lord's Christ.  Here is the story from Luke 2.

Now there was a man in Jerusalem called Simeon, who was righteous and devout. He was waiting for the consolation of Israel, and the Holy Spirit was on him.

It had been revealed to him by the Holy Spirit that he would not die before he had seen the Lord’s Messiah.

Moved by the Spirit, he went into the temple courts. When the parents brought in the child Jesus to do for him what the custom of the Law required, Simeon took him in his arms and praised God, saying:

"Sovereign Lord, as you have promised,

You may now dismiss your servant in peace.

For my eyes have seen your salvation,

Which you have prepared in the sight of all nations:

A light for revelation to the Gentiles

And the glory of your people Israel."

The picture above is of one of my favorite puzzles that our family has worked at Christmas time--Simeon holding baby Jesus and giving heart-rending thanks for the Messiah that he knew had come.

A few years ago, my youngest son and his wife started talking about adopting a child. Because of the wait they knew was coming, they called the child Simeon referring to the story in the Bible. For various reasons, their wait for this long-hoped for child ran into several years. Christmas night as Andrea and I were cooking, I asked her if they had given up on their hoped for child. She said, "No, the dream is still there." The ache in me for that new descendant and grandchild had been getting stronger and stronger.

On the day we celebrated Christmas, December 26th, after all the gifts and stockings had been opened, an envelope was handed to me. In it was the following poem. 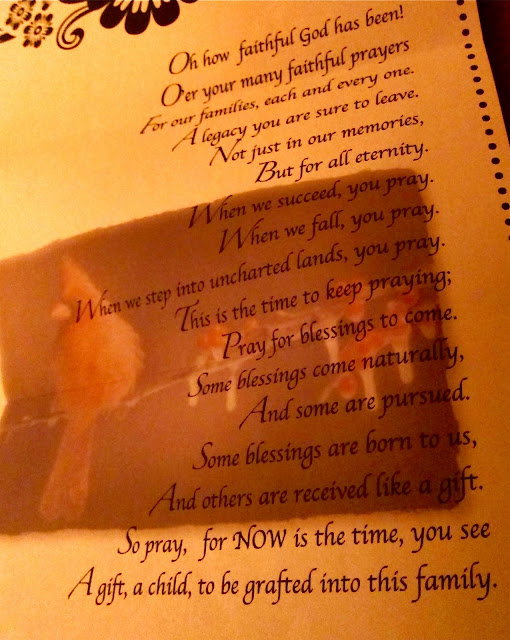 Af first I started crying because of the reference to "the legacy of prayer." Then as I read the last two lines, I realized that something wonderful was being told to me just as something wonderful was told to Simeon so long ago.  I was to have another descendant--a long-awaited one--one that would not come from our bloodline but our heartline.

Isn't that just like God?  To give an uncontainable gift after the month of concentrated prayer for our descendants?  He birthed the month of prayer in my spirit--He has known forever the identity of our new family member--He waited heavily with the knowledge our whole family rejoiced in, especially our only grandson among seven grandchildren.  Naturally, he is hoping for a boy and voiced the desire to be a role model for him.

My kids always say, "It's not Christmas until Mom has cried." Well, they got a boatload of tears from me this year. We have a boatload of love to give a precious child and that child's biological family for sharing him or her with us.

I prayed several weeks before Christmas that this would be our most meaningful Christmas ever, that God would be glorified and magnified. He answered my prayer in the wildest of ways. To God be the glory--great and mighty and awesome and uncontainable things He has done!

I'm in love and can't wait to meet the one I am in love with! We are probably looking at a few months, but it could be sooner. Please join us in prayer that God in His wisdom will bless our family with the child He knows needs us and the one whom we need.

2010-the Year of Longings
My greatest earthly longing has been fulfilled--the knowledge that I am to have another descendant! What a way to end this year of longings--God in His wisdom--He continues to amaze me.

I am linking to Spiritual Sundays.
Labels: Chris and Dree Christmas legacy of prayer Simeon